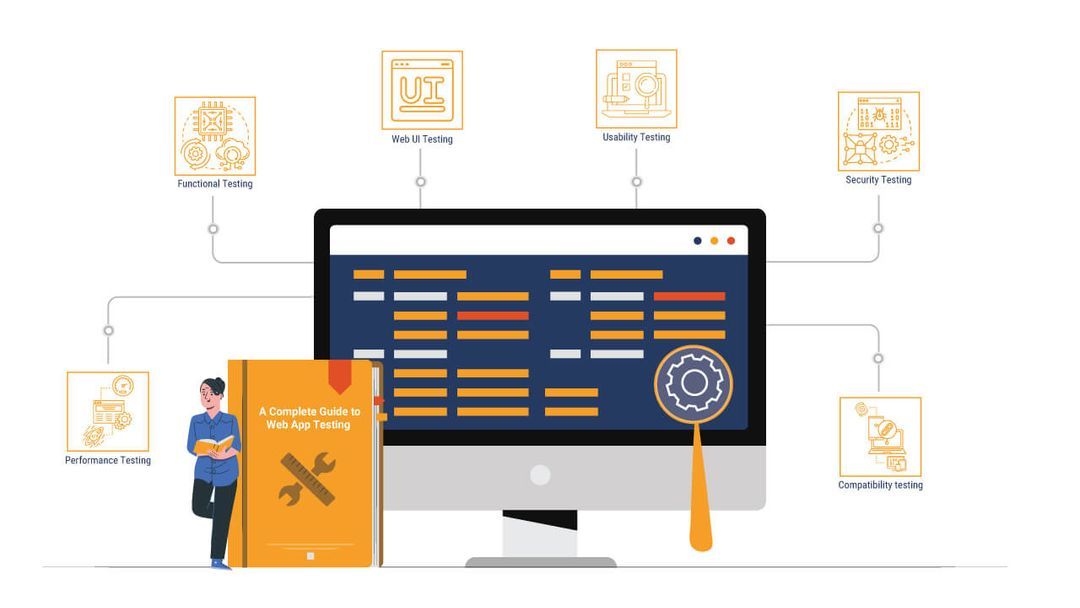 Anything is possible while deploying a website: broken links, web security, difficult navigation, and other issues. Thus, a thorough testing strategy is critical for mitigating these risks and maintaining website quality.

This guide will address all questions about web testing, providing you with the information necessary to approach web app automation testing strategically and effectively.

Check out: Fundamentals of Test Harness

What is Web Application Testing?

Web app testing is a software testing practice that ensures the application's functionality and quality as per the requirements. Before delivery, web testing must identify all underlying issues, such as security breaches, integration issues, functional inconsistencies, environmental challenges, or traffic load.

Why is Web Testing essential?

Check out: All you need to know about application security testing

Remotely test and debug mobile, web, audio and video applications on thousands of devices around the world. Learn more.

Here are some of the fundamental web application testing techniques:

The application's user interface should adhere to industry standards regarding effectiveness and user-friendliness. It is also critical to adhere to global conventions and web standards while developing a web application. Usability testing is appropriate for apps that aim to automate manual processes.

However, testers must consider specific critical issues such as correct navigation, a site map, and avoiding over-crowded content while performing usability testing.

Compatibility is a critical factor to be considered while testing a web application. Compatibility testing determines the compatibility of a web app with operating systems, browsers, mobile browsing, and other printing options.

Security testing is a critical web app automation testing method as it determines whether data modifications or leaks are tolerable. It primarily includes various activities such as verifying SSL, checking the CAPTCHA for automated script logins, and determining whether web files or directories can be accessed directly.

Challenges in connecting with firewalls arise because a port or a firewall can block a web app due to issues with security certificate compliance. Thus, it is critical to test the application across multiple firewalls to avoid such scenarios.

Modern web applications rely heavily on web service layers such as XML/SOAP or JSON/REST for exchanging data between applications or systems. Hence, the need for verifying these web services has increased significantly. However, web testing platforms are not equipped to handle them. As a result, testing web services is a significant problem for the QA teams.

See: How to Improve Software Security

Customers always prefer scalable and highly interactive web applications. If a customer encounters inconsistencies while browsing across browsers, it can adversely impact the enterprise's brand image and growth. Thus, developers and QA testers must track the app's scalability and interactivity across browsers and hardware configurations while conducting usability testing.

Users abandon any slow-loading web app, which eventually affects the company brand and revenue. Thus, to overcome this obstacle, developers should identify the factors affecting performance testing, such as scalability of the app's features, compatibility, and integration limitations.

There has been a constant rise in the number of cyber threats that can leak users' sensitive data. It is essential to monitor security testing processes to avoid loss of information and data breaches. It will help prevent DDoS attacks and other cyber threats. In case of any issue detection, testers can fix those at the earliest.

What is Web Application Automated Testing?

Web application automated testing, or automated website testing, evaluates a website's performance using varied types of automation website testing tools. It is a process in which various software tools are used to analyze a website's performance. The approach simplifies and standardizes web testing parameters in response to configuration changes during the development phase, conserving resources and providing consistent results to site administrators and owners.

Additionally, developers may perform relevant tests and compare results to predicted results by deploying efficient automated website testing tools. Consumers may occasionally encounter several bugs or error warnings while browsing certain websites, impairing the website's usability and readability. As a result, end-users abandon such web apps. These kinds of bugs and defects have a significant impact on businesses, as they can result in the loss of valuable customers. It indicates a lack of proper and effective web application automation testing on such websites. Thus, modern enterprises should leverage test automation for web apps to ensure their websites perform seamlessly and deliver end-users with an uninterrupted experience. Different types of automated website testing include evaluating the functionality and usability of the web app, cross-browser compatibility, the performance of web apps under stress and load, and the accessibility and security of websites.

Testers use a web testing approach to evaluate apps launched using a web browser on the internet. In web page testing, QA testers carry out a set of processes before the actual testing.

In this phase, testers collect all requirements related to the feature and refine them and identify the gaps.

In this phase, testers update the test plan document with a definition of the test scope and objectives, strategy, the entry and exit criteria for web testing, and an evaluation of the test estimate.

QA testers generate test scenarios and scripts using the most appropriate automation technique considering the test strategy as a guide.

At this stage, testers run the defined test cases and document any deviations from the intended result.

If a test case fails during execution and a bug is detected, testers raise and report it using a defect tracking tool like Jira and HP ALM QC.

Once the developer has fixed the defect, testers retest it and re-execute the failed test case.

The test cycle is closed once all defects are fixed and the web application is functioning as expected. If not, QA testers repeat the process.

See: How You Can Prioritize Automated Functional Test Scenarios

Why is an end-to-end web application testing a priority?

Businesses across industries and technology are aligning to scale up to change the course of website testing. Software testing companies are adapting to such industry changes. Rapid technical advancements in web application testing further motivate testers to improve their automation testing expertise. Thus, organizations must have skilled resources with highly efficient automation testing concepts to deliver high-quality software successfully.

Testing strategies and test automation approaches are crucial for organizations focused on cloud computing and business analytics. Businesses include website testing into their software development cycle, using testing methods such as Agile.

There is also a strong demand for adopting the latest software testing trends for software sectors across the globe, as this enables organizations to adapt to the current world's requirements.

Websites and digital apps are business enablers for organizations today. They need to have high-performing websites that function flawlessly across browsers and even under high load. Users and visitors tend to abandon websites with issues and prefer to avoid slow-loading web applications. Thus, businesses must ensure that their websites deliver an excellent customer experience by leveraging next-generation web testing services to perform optimally without affecting web app traffic and provide a great user experience.

1. What are the various configurations that should be considered while testing a web application?

The following critical factors must be considered while testing a web application:

1. Hardware platform: Users may use different operating systems, including Microsoft, Mac, and Linux.

2. Browser: The web page layout varies as per the browser used. Moreover, the plug-ins and browser version are critical elements. Other variables for consideration include the color depth, font size, and resolution of the monitor.

2. What are the steps required to secure a new web server?

The following are a few critical steps that a tester should verify when securing a web server.

1. Assign user rights by their roles.

3. Remove all default scripts and data from the server.

4. Install a software firewall on the web server.

5. Configure and use IIS logging.

3. What are the most frequently encountered issues during web testing?

When performing web testing, the following issue may arise:

2. Issues that arise while navigating the web app.

5. Performance issues - The time required to display a page to a user.

6. Load – The maximum amount of load that the web program can handle.

7. Stress - The amount of load placed on an application causes it to crash.

8. Data flow — Storing data entered by the user in the correct format.

9. No appropriate static information is displayed alongside input fields for data entry.

4. How is the scope of web testing defined?

Before moving the web applications to the production environment, the test team conducts comprehensive testing on websites. It aids in identifying many issues within the website, such as functional discrepancy, application security, integration issues, web service testing, environmental issues, and the application's ability to handle the traffic load. Such cases, if left unaddressed, may affect user experience. Thus, testers undertake these measures to identify the possible bugs during the testing stage.

5. How are client-server and web testing different?

The difference between client-server and web testing is as follows:

There are two distinct components for testing in a client-server application. The application is deployed on the server machine for web page testing, whereas the .exe is executed on client machines for client-server testing. The test is performed across various categories, including graphical user interfaces on both sides, load, functionality, backend, and client-server interaction. This environment is mostly used in Intranet environments. QA testers are aware of the number of servers and clients and their locations in the test scenarios.

The web application is a little different and more complicated to test, as the QA testers do not have complete control over the web application. The web app is deployed on a server whose location is unknown, and there are no .exe installed on the client system. Testers have to test it using several web browsers. As web applications are expected to be tested across a variety of browsers and operating systems, they are tested for browser and operating system compatibility, error handling, load testing, backend, and static page testing.