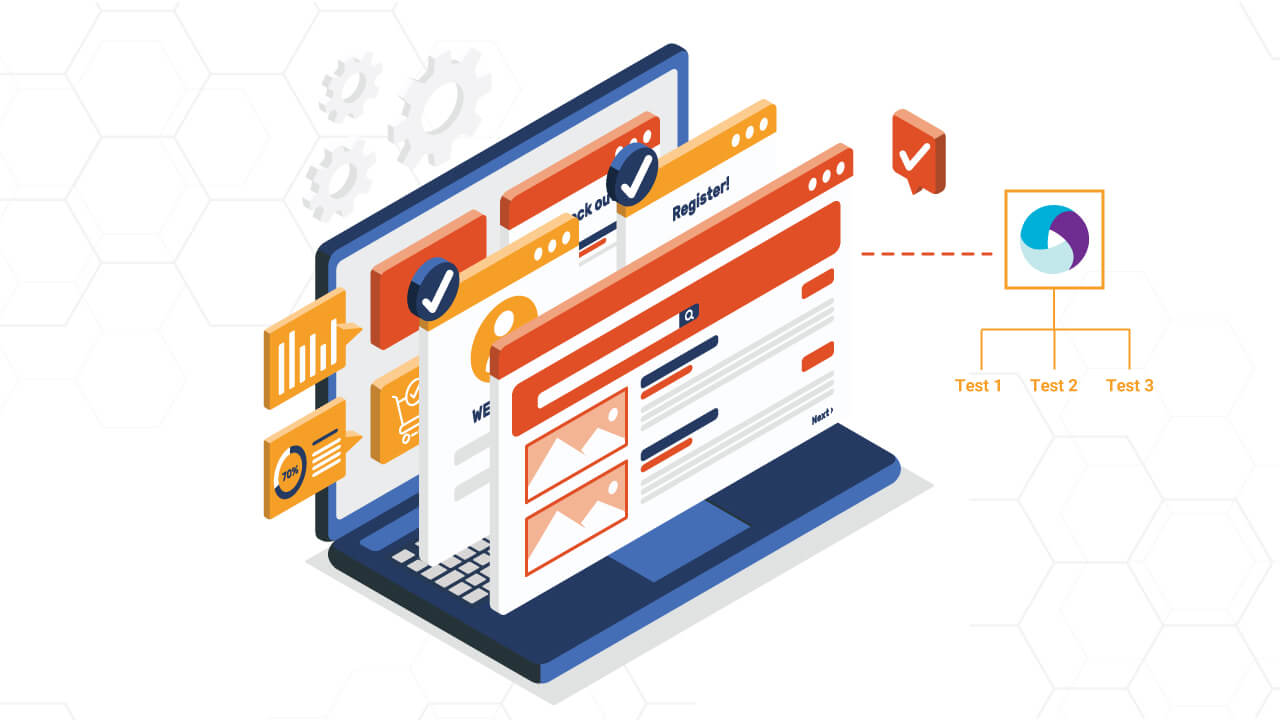 UI-driven functional tests take time, and even when we've used all the tricks up our Appium sleeves, the tests will never be as fast as, say, unit tests. The ultimate solution to this is to run more than one test at a time. Think about it this way: if you have a build in which you are constantly adding tests (as you are likely to do while ensuring quality for an app), then each additional test will add directly to your build time, if you're running them one-by-one:

Let's say, on the other hand, that for each additional test you add to your build, you unlock an additional test execution thread. In this case, you're running every single test simultaneously, and the build is only as long as the longest test!

It's probably not realistic to assume that you could afford thousands of test execution threads, but it illustrates the point that often the most effective optimization you can make to reduce overall build time is to parallelize test execution. Also, with the availability of cloud-based test execution, adding additional test threads becomes a problem of cost rather than technical feasibility.

In another article, we'll discuss all the ins and outs of parallelization from a testsuite perspective. For now, let's just learn the mechanics of running multiple Appium sessions at a time, and leave the big-picture stuff for later.

Also check: Tips for Speeding Up Your Remote Appium Sessions

There are basically four designs for running multiple Appium sessions at a time:

(In this article we'll explore Options 1 and 2 above, leaving Selenium Grid and cloud-based Appium testing as topics for other articles.)

Regardless of which option you choose for the Appium server side of the equation, there is also the client side to worry about. Just because you have multiple Appium servers or a cloud-based solution doesn't mean you have parallel testing---you also need a way for your test runner or test framework to kick off the tests in parallel! This ability to run tests in multiple threads (or using an event loop) is not part of Appium itself and must be configured in your test runner itself. Each language and test runner has its own way of accomplishing this task.

In the world of Java, the most straightforward way to do this is probably with Maven and the Surefire plugin, which lets you update your pom.xml with the following kind of configuration:

Here you can see that we can either parallelize based on methods or some other grouping (classes, for example). We can also specify how many test threads we want---this should of course match the number of Appium sessions we can handle.

Then, each test thread would need to adjust the URL of the Appium server to include the appropriate port, for example:

Obviously, this isn't ideal from a testsuite design perspective, since we have to have some way of specifying ports differently based on different threads, meaning creating different test classes or similar. Nowadays, Option 1 is thankfully not the only option: we can also simply start multiple sessions on a single running Appium server! This means we can forget starting multiple servers on different ports and rely on the one server running on the default port, or any port we want.

Read: All You Need to Know About Appium Mobile Testing

Unfortunately, this isn't everything we have to worry about. Appium orchestrates a host of services under the hood to facilitate communication between different subsystems and drivers. In some cases, an Appium driver might need to use a port or a socket, and it would not be good for another session using the same driver to compete for communication on the same port or socket. There are thus a handful of capabilities that need to be included to make sure no system resource conflicts exist between your different test sessions.

One advantage of Option 1 (running multiple Appium servers) that I didn't mention before is that you can use it to abstract away all this port configuration from your testsuite, by leveraging the --default-capabilities server flag. Essentially, you can define unique port values on server start (rather than in desired capabilities), for example:

(This gets us back to the problem of now having to specify different Appium server ports in our driver creation, but this problem could be avoided with the use of something like Selenium Grid)

Putting It All Together

Once we've got our client set up to fire off multiple tests at the same time, an Appium server running which can handle multiple sessions (or we're running multiple servers), and appropriately unique desired capabilities for each test thread, we're good to go. With the Gradle setup I'm using for Appium Pro, the Maven method I discussed above is not available to me. The most straightforward approach is to parallelize based on test classes. First, I need to update my build.gradle to include the following directive:

This tells Gradle that I want to run in at most 2 processes, forking a new process for every test class I encounter. What I need to do next is organize my testsuite so that different classes contain different sets of desired capabilities. Because I am multiplying test classes based on the number and type of capability sets, that means each test class should inherit a base class which contains the actual logic (we don't want to duplicate that!), so some organization like the following:

In a real, well-architected build, you probably want to follow a completely different approach, one that doesn't involve hand-coding multiple classes just for the sake of getting parallel testing going, but for the sake of this article it's what we'll do. Here's an example of login test ready to be run in parallel on different iOS simulators:

Notice that both of classes with actual @Test annotations differ merely by a few capabilities. This could obviously be tightened up to reduce boilerplate, using an anonymous inner class design, or similar. But it illustrates the point. Now, we can run these tests in parallel by isolating them using gradle:

If you run this, you'll see the Appium server handling multiple sessions at the same time, their log output interleaved. This is another reason to potentially choose multiple servers over a single server---the ability to direct log output to different files, or otherwise keep it sensibly organized for debug purposes!

And that's basically it. Parallel testing is a deep topic and there's lots more to say about it, so stay tuned for other articles in this genre. Don't forget to check out the full code sample for this edition, which also includes an Android test class. You can update the build.gradle file to have a maxParallelForks of 3, fire up an Android emulator, and run a cross-platform suite in parallel too!

Running multiple tests in parallel is crucial yet difficult at times. Nonetheless, HeadSpin can make this easy, enabling you to improve your Appium test cycles.

With HeadSpin, you can: