Press Resources
Home
>
Blogs
>
What Are Some of The Best Practices for Application Performance Testing? 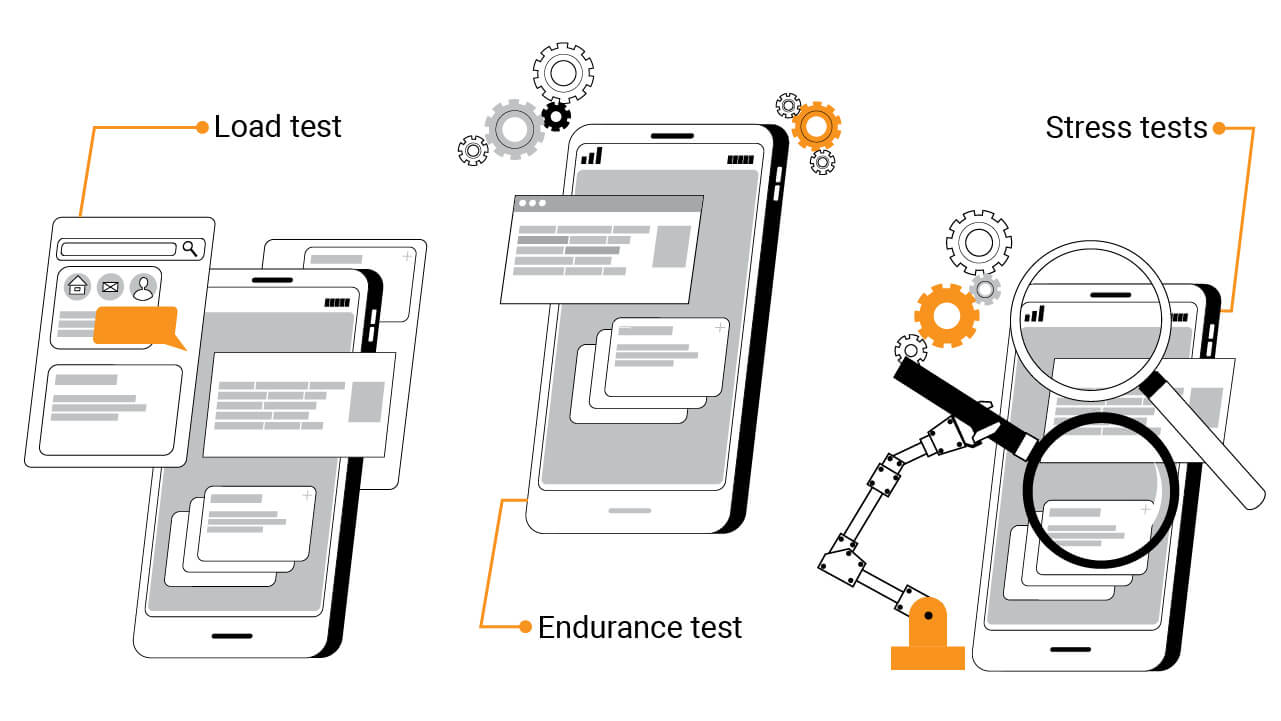 What Are Some of The Best Practices for Application Performance Testing?

With fast-paced and digitally aware consumers, there is no space to accommodate slow and unreliable web and mobile applications in today's digital world. Within a hypercompetitive market that currently prevails, your app can easily go out of trend in a few days or hours if any contemporary app evolves. Recent years have seen a seismic rise in the number of apps available. As per the Statista 2022 reports, the largest app stores like Google Play and Apple App Store are the abode for approximately 3.48 million and 2.22 million apps. The rise in app numbers has made it essential for businesses to focus on application performance testing to match the right expectation of their consumers, ensuring the desired speed, reliability, scalability, and stability, and ace the market competition.

Check out: Speeding Up Tests with Deep Links

What is application performance testing?

Application performance testing is often considered a type of non-functional testing that helps test the quality of an app under varying capacities. This mode of testing is an integral part of application testing workflows with its ability to deliver insights into product behavior and interaction and response to user's actions with substantial detail, accuracy, and precision. The chief purpose of performance testing for applications is to identify and eliminate the performance bottlenecks and aspects like poor scalability, slow response time, long load time, and system downtime in the software application that create negative user experience or even software crashes.

There prevail multiple performance tests that assist in analyzing the readiness and effectiveness of the app to function under specific conditions:

Load test: This form of testing simulates demand on the app that enables it to validate the app's ability to perform under anticipated loads. These can also be considered volume tests as they generate traffic volumes similar to real-world traffic situations. Following this, the loads are directed at the app that is being tested.

Endurance test: These tests are performed to simulate large traffic loads for extended periods to help evaluate how the apps perform in continually high demand, including large transaction rates, numerous concurrent users, and many more. Endurance tests or soak tests efficiently detect memory leak issues that appear only over a long period.

Connect to our real local devices worldwide and run geolocation tests on your mobile apps and websites. Know more.

Spike tests:  This type of testing allows the teams to see how the apps can perform under the most stress. The results are extremely vital for businesses to deduce the effectiveness of the apps while managing an unusually large number of visitors and transaction rates.

Stress tests: Stress testing enables evaluating the amount of stress the app can withstand before breaking down or failing.

Today, the industry offers some best-in-the-line performance test software, driving enterprises to conduct proper performance testing for their applications and meet the expectations of their clientele. However, while executing app performance testing, there happens to be a series of factors that businesses must necessarily consider enhancing the efficacy of this process.

Following are some of the best practices that you can follow for app performance testing.

Prior to implementing the application, it is essential to understand the application, its capabilities and offerings, its intended use, and the conditions where it is expected to thrive. Additionally, the team needs to develop an understanding of the probable limitations of the app. Listing out the common factors that might impact the performance can be an effective practice, followed by deploying these parameters while testing.

Businesses often end up developing unrealistic expectations. Hence, it is essential to set realistic baselines by selecting practical and realistic scenarios. Teams should ensure that the testbeds include multiple varieties of devices and environments where the app needs to thrive. For instance, several tests are executed right from a zero value, followed by adding load until it reaches the desired threshold. Nonetheless, this scenario is not realistic, and often engineers get a false picture of the system load, as the load can never reduce to nil and then progress further from that value.

In the initial stages post the test plans, a QA team should build a toolkit of load generation and performance monitoring tools. The testers create a bank of IP addresses that can be leveraged during sessions. As the project proceeds, it becomes a common practice to modify, change or expand the server performance testing toolkit for providing a broader view of the app performance.

Performance testing has often been a throwaway sought in the later stages of the development cycle. However, to achieve satisfactory results from the app, performance tests must be at the crux, executed in the initial stages, and in a proactive manner. The earlier it is done, the better the team can identify and detect the bottlenecks with enough time in hand to properly eliminate them. Further, it becomes more complex and costly to implement modifications in the later stages of the development cycle. Thus, the best practice would be to perform these tests as part of the unit tests that will assist in quickly identifying performance issues and rectifying the same. It is wise to incorporate an agile strategy with agile methodologies trending today, employing iterative testing throughout the development lifecycle. Besides, teams should allow performance unit testing to be a part of the development process and later repeat similar tests on broader scales across subsequent stages for evaluating the app's preparation and maturity.

5. Understanding performance from the point-of-view of the end-users

There is a common tendency that performance tests focus more on the servers and clusters running software, resulting in inadequate measurement of the human elements. Measuring the performance of clustered servers might return a positive result, but users on a single overloaded server might experience unsatisfactory results. Instead, it is a better approach to also include the user's experience along with server experiences and responses. The tests should systematically capture every user's experience and interface timings with synchronicity to the metrics derived from the server. Combining the user perspectives and including a Beta version of the app can help capture the complete user experience seamlessly.

Applications are built on many individual complex systems that include databases, app servers, web services, legacy systems, and many more. While conducting app performance testing, these systems should undergo rigorous performance testing individually and together. This modular testing approach helps detect weak links, identify the systems that can harm others, and determine which systems should be isolated for further app performance optimization.

To measure the application's performance, one needs to understand the system's capacity. This practice involves planning what would be the steady-state concerning concurrent users, simultaneous requests, average user sessions, and server utilization during the peaks of the day. Furthermore, it is essential to define performance goals like maximum response times, system scalability, good performance metrics, user satisfaction marks, and the maximum capacity for the performance metrics.

Check out: Fundamentals of Test Harness

It is also vital to define related thresholds that will send alerts for potential performance issues as the test passes through those thresholds. With increasing levels of risk, additional thresholds need to be defined.

Building this complete performance model and planning the processing should include:

Most often, QA systems do not match with the production systems. In such scenarios, having baseline performance measurements helps to provide more reasonable goals for every environment utilized for testing. These especially provide an appropriate starting point for response time goals with no previous metrics involved, without having to identify and base those on other applications. Baseline performance testing and measurement like single-user login time and response time for individual screens should preferably be executed with no system load.

Planning, designing, and executing performance tests are crucial but not enough. Along with these, reports must also be an area of focus. Efficient reporting allows conveying critical information and insights into the overall performance analyses and the outcomes of the app's activities, especially to project managers and developers. Analyzing and reporting consistently help in the development of future fixes. Moreover, the developer reports must be distinct from those provided to project managers, owners, and corporate executives.

Some additional practices for mobile applications

Performance testing for applications is crucial in offering business managers critical insights and information for efficient decision-making and reducing the risks that teams might face after the product launch. Today, businesses are looking forward to investing more and more into app performance testing to meet the dynamic requirements of the aware consumer base. As a result, deploying effective testing practices with top-notch testing platforms has been a primary focus for enhancing the robustness of the applications, supporting market claims, and improving the scalability and stability within the applications while ensuring the best performance of their applications.

1. Why should you consider app performance testing?

Executing an app performance testing is an integral part of assessing its current performance conditions that helps determine if the software meets the requirements of speed, scalability, dependability, and stability requirements under expected loads. The apps sent to the market with poor performance metrics will lead to a bad reputation and hinder the desired sales goals.

2. Are there any specific types of applications that need performance tests?

Generally, for website performance testing, we need to test page load time across browsers, refresh rates, different screen sizes, and resolution across multiple browsers OEMs. On the other hand, mobile app performance testing should include user conditions like varying network conditions, background apps, and latency of sensors like camera and location. These must be tested across devices and OS versions to provide the best results.

What Are Some of The Best Practices for Application Performance Testing?