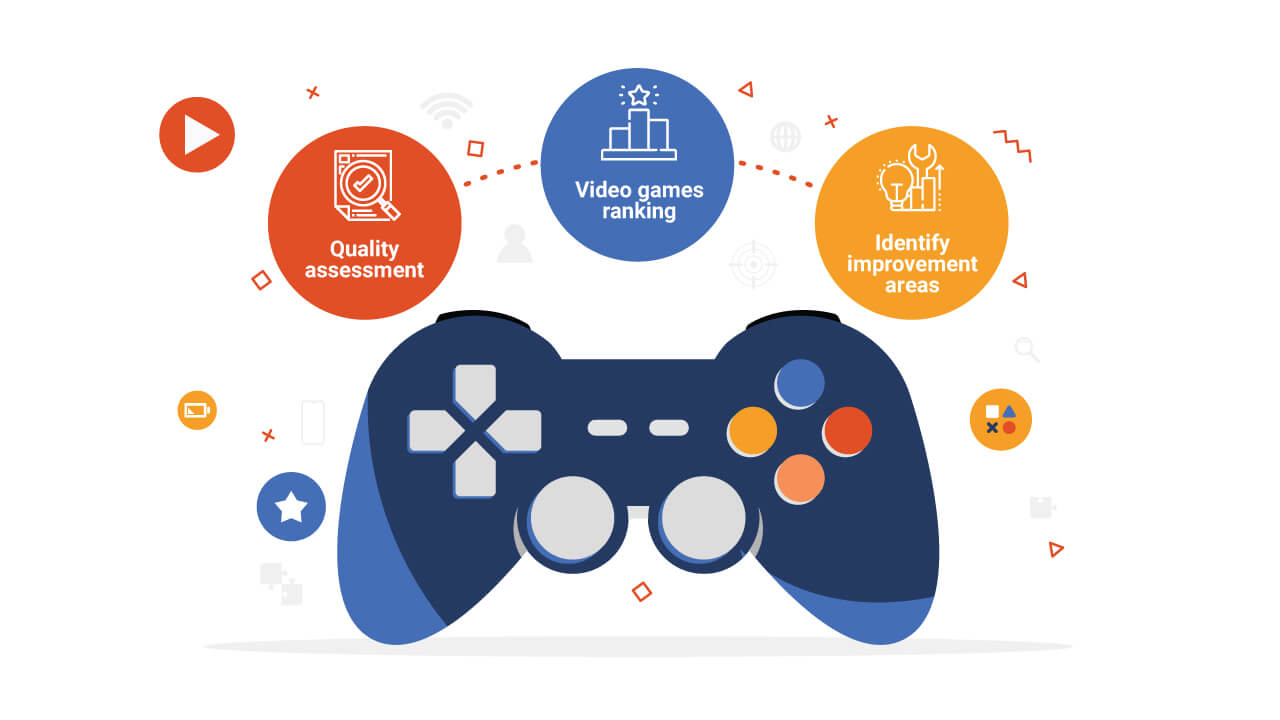 A Complete Guide to Game Testing - Its Types and Processes

Video games are more popular than ever today. These flood our newsfeeds, drive social interactions and give us boatloads of fun for hours. There is a myriad of game genres to choose from, whether these are point-and-click adventures, simulations, virtual reality games, and many more. Especially with the COVID-19 pandemic, the number of users of these games has exponentially increased. According to Statista, the number of gamers increased to 201.9 million in 2020 from 188.2 million digital gamers in 2019. It is further projected to rise to 213.3 gamers by 2025.

Amidst this exceeding popularity, gaming app testing has become of increased importance to promise flawless experiences for gamers.

What is game testing and why is it crucial?

Game testing, a crucial subset of game development, is a software testing process that enables developers to discover, document, and fix software bugs to prevent their interference with the gaming experience. This assists in controlling the quality of the game by creating optimal performance across distribution channels.

Video games today are highly interactive with complex gaming mediums and coupled with several users consuming games over multiple platforms, which make these more susceptible to vulnerability, unexpected errors, and glitches. These might go unnoticed and unresolved without a proper testing mechanism. Hence, testing is crucial to avoid criticisms from gamers, losing out on significant sales due to poor experiences. The primary importance of game testing includes:

Check out: Why is Usability Crucial for a Good Gaming Experience?

What are some of the bugs that drive game testing?

Some of the most common game bugs include:

What are the consequences of not fixing bugs?

Let's take a look at the impact of these bugs:

The risk factors of launching games in the market

When game testing is executed, developers primarily focus on factors like errors, bugs, bottlenecks, coherence, and inconsistencies. Apart from these, there exist other risks that game testing can help discover:

Most mobile games utilize direct screen access, which is performed by bypassing the OS-level tasks with the help of the various APIs and software frameworks like OpenGL and ActiveX. As a result, the conventional frameworks for mobile automated testing become redundant when mobile games are concerned. The automation only makes use of XY clicks as there is no access to the object-level data.

Testing for the multiplayer feature can be a significant challenge for the testers, especially when players are in very different locations and far apart from each other. Mobile games with multiplayer features are often difficult to test and debug and can also consist of problems that are difficult to fix. To resolve this challenge, the game testers need to check mobile games for their robust design.

Choosing the best engine for a game is no doubt a challenge for the developers, but it is often more difficult for QA to be prepared to test any range of engines they are given. They have to consider all the specifics of each engine and seamlessly apply different types of game testing to check it thoroughly.

Performance is one of the key drivers of user experience, and real performance can only be monitored for using real hardware. Frame rates also act as an important factor with the richness and diversity of mobile devices where every new model counts. Further, most games utilize sensors or other hardware features which are not consistent from one device to another. If this is left unchecked, it causes several negative effects on the overall performance.

The range of tools, techniques, best practices, and frameworks leveraged for mobile game testing are very extensive. But certain aspects are always executed in the same way by the developers. Despite different game engines, more than 90 percent of game developers utilize some form of image recognition. This enables testing to be as easy as capturing a screenshot and analyzing it automatically or manually. It can also be completely gameplay where the game is driven by test scripts and output is logged for further inspection.

Also read: Why Testing Mobile Gaming Apps is Harder Than You Think

What is a game development cycle?

Before delving into the types and processes of game testing, let us first take a glance at the game development life cycle (GDLC)

1. Concept development — In this first phase, the idea or concept of the game is developed, where a document is prepared that details the concept.

2. Preproduction — This phase involves the concept finalization and creating the concept document. Besides, three other documents are created, which are the :

This phase also includes the designers building the prototype based on the decided concept art, gaming levels, and other details.

3. Development — Based on the prototype built, programmers start coding the game. Artists begin working on modeling, textures, and animation.

4. Alpha — In this stage, a workable product with all features and complete gameplay is developed. It uses temporary assets and placeholders, becoming the first milestone in the development process.

5. Beta — The game is completely developed with all assets in this phase.

6. Code freeze/gold — Each and every bug identified in the beta stage is solved, and the game is ready to be released in this phase.

7. Release to manufacture — In this stage, the game is released to the manufacturer.

8. Patch/upgrade — Post the game's release, the next step is maintenance. When required, the team can release a patch to solve the bugs, and further upgrades are released in case new features are added to the game.

Types of tests and techniques for game testing

2. Clean room testing — This is a software development process that intends to develop gaming software with a certifiable level of reliability.

3. Functionality testing — This testing mode involves identifying bugs and other game errors that might affect the user experience.

5. Compatibility testing — This testing type assists in finding out whether a game is functioning correctly, not concerning the hardware, software configuration, and graphics with which the device is built. This is one of the most important tests that evaluates whether the gaming application works across different devices and screen sizes without compromising the quality of the user's experience.

6. Soak testing — This is an automated game testing technique that involves leaving the game running for a long time in various modes of operation, for instance, idling paused or at the title screen. Soaking can help identify memory leaks or rounding errors.

7. Tree testing — Such a testing technique helps organize the test cases and puts together the selection of a proper set of tests that are better suitable for the given set of code changes.

9. Recovery testing — For software, recovery testing helps check how well the app can be recovered from crashes, hardware failures, and other similar failures. The app is forced to fail, and later it is evaluated how it recovers from the failure conditions and the environment.

For instance, while the gaming app is running, suddenly restarting the gaming console and check the validation of the data integrity.

10. Regression testing — The regression testing is executed to retest the unchanged parts of the software. The test cases are checked to analyze the working of the previous functions of the app and if the new features or changes have not caused any new errors or vulnerabilities.

11. Ad hoc testing — This is an unplanned testing technique that is generally utilized for breaking down the system where testers randomly test the app without test cases or any documents.

12. Load testing — This is a type of performance testing for determining the system's performance under real-time loads. Load testing helps to find out the reaction of an app when multiple users are simultaneously using the app.

Read: Strategies that you can deploy for effective mobile application testing

Though game testing and software testing may be fundamentally similar as they involve testing code to deliver high-quality, working software, there are a number of significant differences in both.

Unlike software testing, there are a wide number of areas in game testing, especially in the case of mobile game testing that require more focus. Some of these aspects are:

Very often, specific frameworks are required for functional testing. Several elements of the game design and behavior need to be tested manually as automation is not the most suitable option. Even if it is deployed, it needs substantial effort and test automation tools to generate the test scripts because game test use cases are usually beyond the simplicity of searching static elements on the screen.

Usually, it requires you to embed an agent into the test script for identifying objects and testing if specific actions are triggered within a game. These factors add complexities to game testing as compared to software testing.

How to test a game?

The generic workflow of testing a game includes the following steps:

HeadSpin and its capabilities have percolated well into the gaming industry, allowing the companies to deliver flawless gaming applications for the gamers.

As a solution to these challenges, HeadSpin is able to deploy dedicated Android, and iOS devices on HeadSpin hosted cloud across different locations in a short time frame.

Further, the HeadSpin platform is capable of identifying multiple factors that affect battery drain, which is a significant concern of game developers and testers. This helps improve the overall playtime for the users of lower-end devices.

Other benefits that CYOL offers include:

As the popularity of gaming continues to increase, the focus on testing will increase too. Therefore, every gaming business today concentrates on deploying efficient testing methods and strategies to deliver the right gaming experiences for its customers. It is necessary to carefully follow the game development life cycle at the beginning and consider the various types of testing to ensure building the game just as your customers would want it to be. Moreover, game testing is a repetitive process that must be executed to identify and eliminate newer defects and bugs with every new release of the game.

1. How to write test cases for games?

There are some crucial areas to focus on during testing a gaming application that directly impacts the performance compatibility and user rating. It is hence important to write the test cases based on these factors:

2. What are some of the most popular game engines across the globe?

The most popular game engines are:

Unreal Engine —This is one of the most popular and extensively used engines, owned by Epic Games. It is a game development multi-platform engine designed for businesses of all scales to help use real-time technology for transforming ideas into engaging visual content.

Unity — This is an easy-to-use game engine that caters to multiple platforms with regard to the interactive 3D gaming experience.

Godot — This is free and open-source through the MIT license that requires no royalties, no subscription fees, and no hidden fees. This engine is very efficient for making both 2D and 3D games.

3. What is the role of audio effects in mobile game testing?

Music and sound effects play a vital role in the overall experience of a game. These help project the likings and feelings of the users and build a specific atmosphere to enhance the overall aspects throughout the playthrough. As a result, the audio effects should essentially be monitored and tested for audio glitches, inconsistencies in sound effects, and other bugs that can negatively impact the user experience.

4. What are the Kleenex test and focus group test?

The Kleenex test is a one-off testing option in which a pair of players is given the task of testing a game so that developers can observe their initial reaction to the gameplay. Such testers play the game only once.

On the other hand, focus group testing is an open discussion with a sampling of players in the demographic section you wish to reach to understand their experience after playing the game.

A Complete Guide to Game Testing - Its Types and Processes