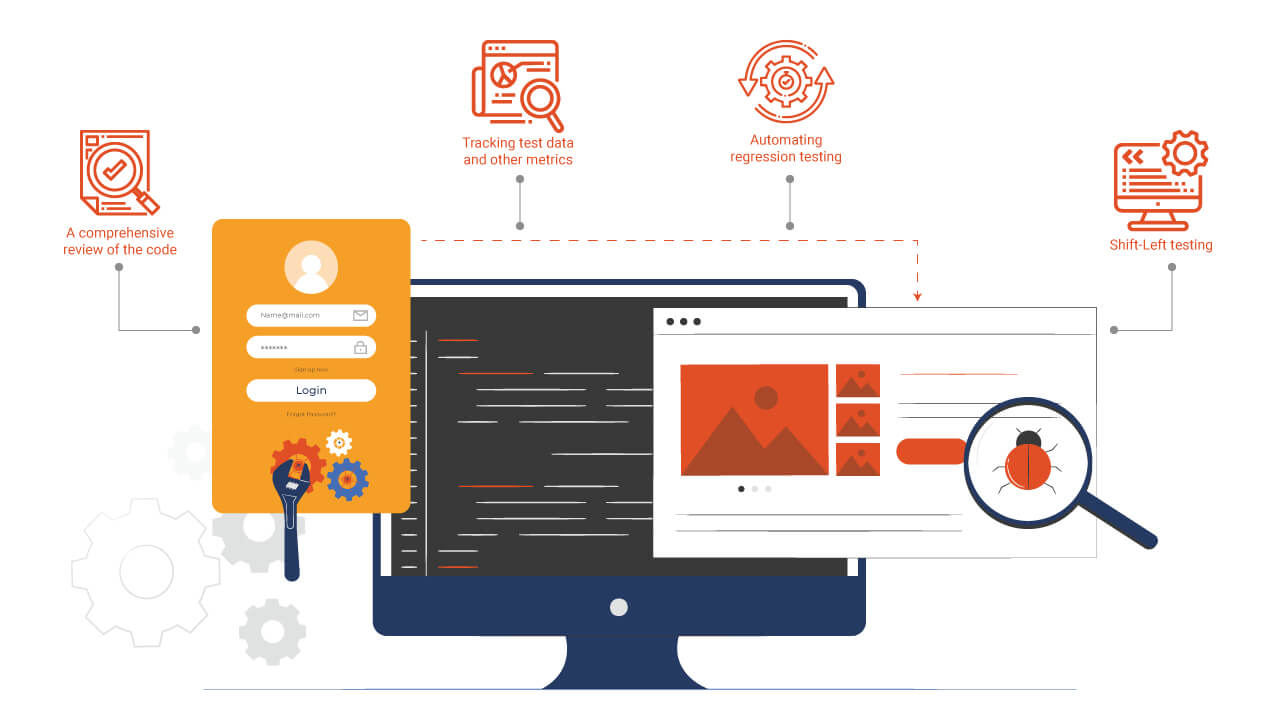 Why Understanding Regression Defects Is Crucial

With the widespread adoption of the agile methodology, regression testing has emerged as a focal point and added value. Today, most businesses outsource regression testing services and utilize an iterative, agile software development process.

For instance, various SaaS service providers often include new functionality or features with each software update. These businesses consult an eminent regression testing firm to maintain performance and verify that newly introduced features do not affect the final product. The primary objective of regression testing is to check that a bug fix has successfully corrected a code defect.

What Are Regression Defects Bugs?

Bugs are frequently detected during software testing, and QA teams fix such bugs quickly. Testers perform regression testing to check for any disruption to the intended functionality of any application feature due to the bug repair. Additional bugs that result from a bug repair are referred to as regression bugs. For instance, let us consider the application login page containing specific issues that the developer has repaired. The login page usually functions as expected, but the registration page generates validation or other issues that did not exist earlier. The login page fix may have brought about the new error. This regression issue or bug must be fixed to deliver a more robust product to the users.

Why are Regression Defects Challenging?

Also read: What is Regression Mobile App Testing and Why Do You Need to Outsource It?

How to Manage Regression Defects?

There are multiple methods for effectively handling regression problems. Testers can ideally manage regression defects effectively and ensure a seamless product launch by the following approaches:

Scripts for both development and testing require regular code review. Testers need to evaluate the test cases to check if they are sufficient to test each component module. Ideally, the QA team should collaborate with the development team to identify high-risk areas. They should modify the regression testing suite to see if the new updates introduced critical regression defects. Integrating automated test cases into your application will assist testers in performing the following:

Bugs discovered during testing are not just intended to be identified and fixed. They provide a comprehensive view of the application behavior. Regression faults, in particular, reveal a great deal about the coding, coverage of previous test cases, and degree of integration between testing and last development.

Monitoring the metrics allows the complete evaluation of the software life cycle for effectiveness. Testers can identify if the current spring has more faults or if the coders and testers had to work quickly owing to time constraints, resulting in increased regression defects.

Considering the details of such variables is essential for evaluating the performance of QA teams, which in turn improves the entire regression effort and assists in detecting any overlooked regression defects. Monitoring the data is also essential for production and other corporate activities, enabling a seamless application launch.

Automation testing is a time-saving approach as it minimizes regression bugs. During unit testing, in particular, automated scripts enable in-depth functionality analysis and identify logical defects. A comprehensive written unit test script ensures that regression testing is performed seamlessly and that development teams can deliver a high-quality application on time.

Typically, QA teams conduct testing in the staging environment after development. However, testers are frequently required to complete a comprehensive round of testing within a relatively short time frame. If defects are identified late in the release process, the release date may need to be postponed, and if critical bugs are detected after migration to the production environment, the entire release may need to be reverted. It proves to be both time-consuming and laborious for teams working in an agile environment. Shift-left testing is a testing strategy that incorporates testing at the earliest stages of the SDLC (Software Development Life Cycle). Continuous Shift-left testing is a highly effective method for mitigating risks and disruptions.

Development and QA teams must perform regression testing for each system code build. However, automated regression tests can simplify and speed up the entire process, allowing QA testers to focus on more complicated case-specific tests. Once automated, regression tests can be activated each time the code control system creates a build. It will ensure that no change has been made that undoes or fixes a preceding feature. The most frequent areas that require automation in the majority of instances are:

Automated regression tests can be implemented overnight or in conjunction with manual testing, freeing up a valuable resource. One of the key benefits of automating regression tests is that manual testers may use the additional time to work on exploratory testing of new features and ensuring a better user experience.

The regression pack is primarily a bundle of test cases executed whenever new software is updated. The scripted tests included in a package are designed considering the specifications of older software versions. The pack is easily compatible with Ad-hoc or random tests. As regression tests can be laborious and time-consuming, the last thing testers need is to count tests that verify whether an eradicated feature is still functional.

Highly-trafficked methods are the most persistent and common use cases for an application. These pathways incorporate the essential features and functionalities of the application. One must comprehend the main clients and the conventional characteristics, highlights, and collaborations on which they rely the most. The effective regression testing package must include tests that ensure that such fundamental functionality operates as intended.

4. Execute a Complete Regression Suite Only When Necessary

It is not necessarily required to run the entire regression suite for every build. In the case of a minor release, it is prudent to run only the smoke tests and regression tests for each modified module. For convenience, it is logical to organize the test cases for regression testing according to the AUT module covered by every test. For instance, if the release includes a change to the accepted payment methods for an online store, it is preferable to conduct regression testing for the payment procedure, but not for extra features such as finding items and adding them to the cart.

Tests that have previously identified bugs and defects should be included in the regression test suite. In contrast, tests that the application passes are more likely to be authentic.

Let us discuss the most common examples of regression testing.

Functional Regression - It refers to the sequence of comprehensive tests conducted across all portions of an application to determine if the most recent updates have resulted in code instability.

Bug Regression - In this regression test, the QA specialist verifies whether or not a specific bug that was supposedly fixed has been eliminated.

Build Verification Tests - This includes tests that testing teams use to determine if the damage is extensive or if the build is fixable. Any unsuccessful testing would result in a build rejection.

Conversion and Port Tests - In these tests, QA teams perform various test cases to assure that the application has been ported to an advanced new platform successfully.

Localization Testing - A quality assurance expert evaluates the interface performance and verifies that the application adheres to its new compliances and rules if an application has been modified and rewritten in a different programming language. The modification of a programming language may necessitate the changing of existing test cases or the creation of new ones.

Regression Testing Is the First Line of Deference

As with all software quality assurance, one of the primary objectives of regression testing is transparency which facilitates the organization's precise awareness of what the code system will and will not do. The regression test suite is the initial line of defense against the leakage of defects into public releases.

Regression testing must be meticulously examined and maintained for success; otherwise, it will become a mere nuisance and be ignored. Regression testing should be an inherent part of a robust test automation process to maintain its relevance and ensure that it is used to safeguard the system's integrity.

It enables developers and QA testers to automate build-over-build comparisons and examine regression data to determine whether a build passes or fails. It also facilitates comparing digital experience KPIs across test sessions and lets QA teams obtain AI-driven insights for resolving functional or performance declines. They can construct a robust ontology with specific session tags for granular cohort analysis. HeadSpin also enables developers to plot trend lines and track and monitor application performance over time. They can set custom alerts and configure a proactive regression Alert Watcher based on criteria such as geo-location or device SKU for notifications when regressions are identified across various markets or devices.

HeadSpin's AI-powered Regression Intelligence seamlessly integrates into the CI/CD workflows, automatically detecting regression issues for every build of an application. With HeadSpin, developers and testers can compare user experience KPIs across real devices in over 90+ locations worldwide to uncover network, API, cloud, or edge issues.

To explore more about HeadSpin Regression Intelligence, sign up for a free trial.

1. What are the various kinds of regression testing?

The different types of regression testing are:

Regression testing is executed to ensure that the integration of all modules and modifications or enhancements in any module has not resulted in a code break.

On the other hand, system testing verifies that end-to-end flows function as planned, and acceptance testing checks that the system has been designed in accordance with business requirements.

Also read: What is end to end testing?

3. Can testers perform regression in the production stage?

Regression testing is always performed after integration testing and before user testing and production deployment, whether the development environment is Agile or DevOps.

Test cases are mostly automated as they must be performed repeatedly, and manually rerunning the same test cases is both time-consuming and tiresome. Why Understanding Regression Defects Is Crucial