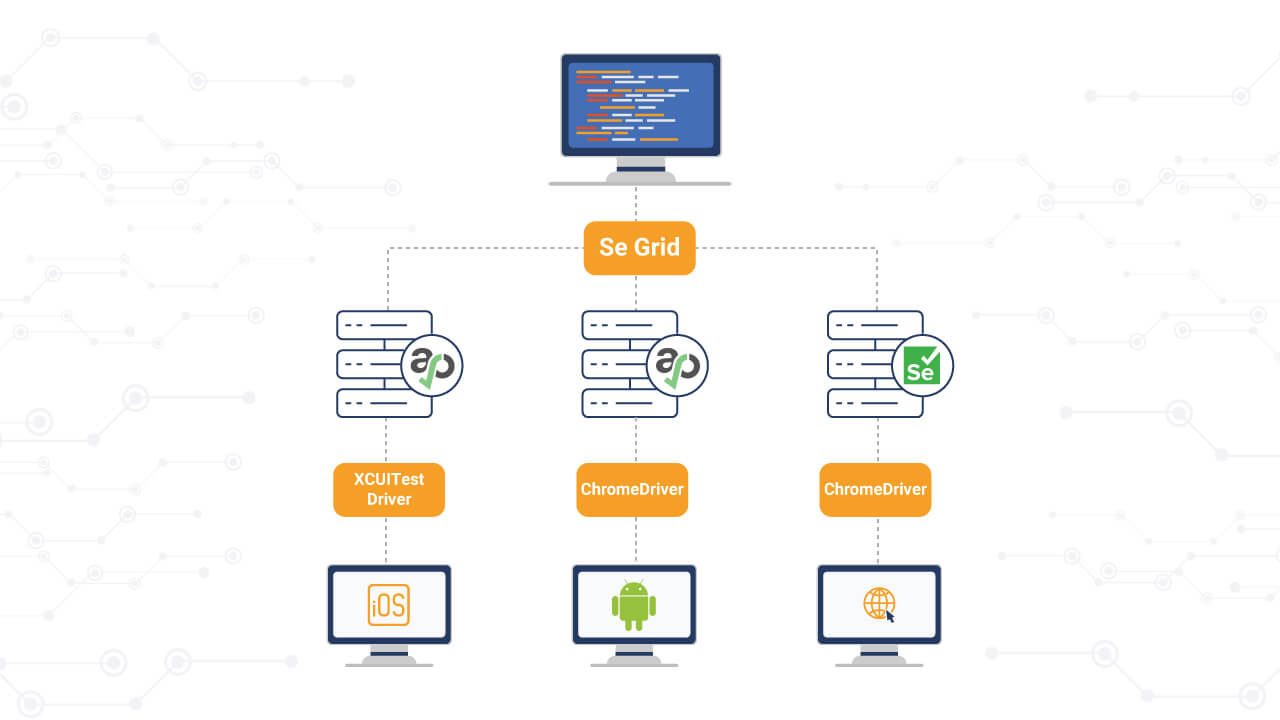 During the development of your test suite, it's helpful to run tests one at a time, and on one target platform at a time. But when it comes to a production CI environment, you're definitely going to want to run your tests in parallel, with as high a concurrency as you can manage. We've already looked at how to run your Appium tests in parallel, and it involves setting up specific capabilities in your test to make sure that, for each test, Appium can instantiate an appropriate driver without stepping on the toes of the drivers running other tests.

This approach only scales so far, however. There's a limit to how many real or virtual devices you can run on one machine. What if you want to run 100 Appium tests in parallel? You're likely not going to be able to do that all with one Appium server. Or what if you're running a web test, and would like to make sure your testing works on desktop browsers as well as mobile devices? For that you'll need to mix in Selenium. Either way, you're eventually going to run into a situation where you need multiple automation servers running, which adds a lot of complexity to your test script. Now your test script needs to know the host and port of each server, which servers host which devices or browsers, and how to make sure it doesn't start too many tests on one server and overload its capacity. Essentially, you're dealing with an execution model that looks like this:

(In this example, we're trying to run a web test in parallel across Safari on iOS, Chrome on Android, and Chrome on Desktop).

Check out: A Complete Guide to Selenium Testing

Also check: Everything you need to know about Selenium testing

In other words, I've been describing a model that looks more like this:

Beyond the simplicity of needing to know only about one test server, the Selenium Grid model is particularly nice for Appium, because Appium drivers also require a number of system resources (unique ports, etc...). On the Grid model, you can start each Appium server independently, with a predefined set of ports or the like, using the --default-capabilities flag. So, for example, I could start a set of Appium servers like this, also using the --nodeconfig flag to tell Appium it should connect with Selenium Grid:

Now each of these Appium servers will be registered with the Selenium Grid, and each server has declared which wdaLocalPort it needs; now my test script doesn't have to know or care about this! It becomes an ops step, which makes much more sense.

The magic pretty much all happens in the "node config" file, which is defined as JSON. There are a lot of nodeconfig options to choose from, but here's an example of the config I'll be using for the Safari-on-iOS node in this guide:

Let's take a look at some of the important configuration keys:

Starting Up the Grid

That's basically all you need to know about how Selenium Grid works with Appium. So let's dive into a working example. What we want to end up with is parallel execution of one web test, across Safari on iOS, Chrome on Android, and Chrome on Desktop (just like in the diagrams above).

Here are the contents of the nodeconfig JSON files (in addition to nodeconfig-ios.json, which is above). (You can also download them from the Appium Pro repo on GitHub).

This is all the setup we need! In a real production CI environment, you'd probably have this all automated and potentially registering lots more nodes across many different physical or virtual servers. Anyway, once you've got everything up and running, you should see messages in the Selenium Grid console to the effect that several nodes have checked in:

Check: The Increasing Need for Performance Testing in Web Applications

Running Tests on the Grid

Because our test project is Gradle-based, our best option for running in parallel is to use maxParallelForks (as described in here, along with instructions for Maven-based projects). Here's how I've updated my build.gradle to that end:

This will cause Gradle to create a new thread for each test class. Unfortunately, a consequence is that for real parallelism, we need to have separate test classes, not just separate methods within one test. For that reason, this example includes 4 Java files: one as a base test class for shared code, and 3 platform-specific classes, so that they can be run in parallel. Here's the base class:

As you can see, it contains the actual test logic we want to execute, which attempts a login on The Internet and checks that the login fails. The only real item of interest here is that we have saved a reference to the Grid hub server, running on the default port 4444. This is what each test class will use to connect to the Grid hub.

And here are the three platform-specific classes:

The only responsibility for these classes is to get the right capabilities set up, instantiate a driver with them, and kick off the actual test. With each of these classes set up in their own files appropriately, I can now use a gradle command to run my test suite in parallel:

(The * helps me select all the test classes I care about for this example, and not other ones).

At this point, all three tests are started simultaneously, and Selenium Grid forwards each session to the appropriate node. The result is that all the tests execute at the same time (though on my machine, the Chrome Desktop test ends much faster than the other two)!

Selenium Grid, and distributed parallel testing in general, is a deep topic, and this guide could only cover the basic cases. But what we've shown is enough to use to get a test grid of basically any size up and running, potentially even mixing and matching mobile and desktop testing as well.

What you'll no doubt find as you get into setting up your own Grid is that, fabulous as Selenium Grid itself may be, there's an awful lot of maintenance associated with running the various nodes! That's one reason that there are, nowadays, a number of options for running your Appium tests in parallel in the cloud, and it's important to try solutions like these out before going all-in on an in-house Grid setup, so you can do appropriate cost-benefit analysis for your team.